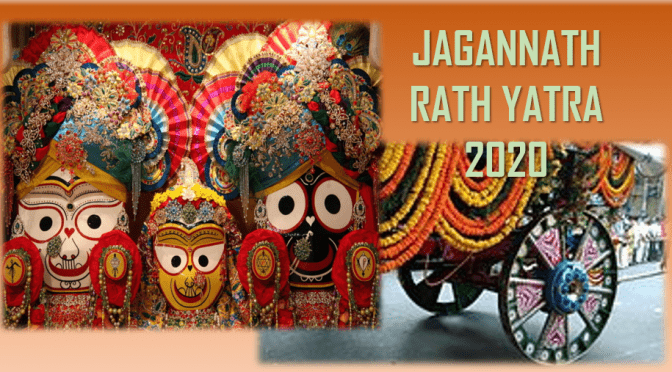 Jagannath is a combination of two words, Jagat (Universe) and Nath (Lord). Therefore the word Jagannath means the Lord or Master of the Universe. Sri Jagannath Temple is a Hindu temple, dedicated to Lord Jagannath. It is located in the coastal state of Odisha, Puri City. This temple is known as one of the 4 Hindu Dhams. This temple belongs to the Vaishnava and is dedicated to the incarnation of Lord Vishnu “Lord Jagannath”.

The annual Rath Yatra is a famous festival of Puri Jagannath. On this day, Lord Jagannath, his elder brother Balbhadra and his niece Subhadra embark on a journey, seated in different grand and well-decorated chariots to their aunt’s place, Gundicha Temple. Gundicha Temple is occupied by images of the deities of Jagannath, his brother Balbhadra and neice Subhadra for seven complete days (total 9 days including the start and concluding day of Ratha Yatra) every year during the annual rath yatra festival.

1. Hera Panchami
A major ceremony celebrated in the Gundicha Temple during the Rath Yatra is on the 5th day of the Ratha Yatra also known as Hera Panchami. While Jagannath visits Gundicha temple, his wife Laksmi is left behind in the main temple of Puri. On Hera Panchami, the furious goddess Lakshmi arrives, in the form of the image of Subarna Mahalakshmi, at the Gundicha Temple. She is formally carried in a palanquin with much fanfare and welcomed and worshipped by the priests of Gundicha Temple, who take her to the sanctum to meet Jagannath. The husband and wife seat face-to-face on the porch in the sanctum of the Gundicha Temple. Lakshmi requests him to return home and Jagannath gives his consent by offering her agyan mala (a garland of the consent), which the goddess accepts and takes with her while the return to the main temple in the evening. Before returning to the temple, to vent her anger at being left out of the vacation, Lakshmi orders one of her attendants to damage a part of Jagannath’s chariot, the Nandighosha. This ritual is known as the Ratha Bhanga (the breaking of the chariot).

2. Dakshina Moda:
Dakshina Moda is a ceremony of facing south on Sasthi or the sixth day of Rath Yatra. The chariots of the deities are parked outside the temple, facing the main temple gate (western gate). In preparation for the return journey, the Bahuda Yatra, the chariots are turned to face towards the main temple in the southern direction and are parked near the Nakachana gate (eastern gate) of the Gundicha Temple through which the deities leave the temple. Devotees believe one can attain salvation by witnessing this ceremony.

3. Rasaleela
Rasa lila is described in Hindu texts like the Gita govinda, bhajans, bhagwat purana, as a night in Vrindavan when Krishna danced with his gopi-consort Radha and other gopis. The image of Jagannath is taken to the mandap (a temple hall) of the Gundicha Temple where hymns from the Gita Govinda are sung for the last 3 days of his stay in the temple. In the olden days, dev and devdasis sang the verses, which are now sung by the temple servitors.

4. Sandhya Darshan
As per tradition, during Jagannath’s stay in Gundicha temple, the kitchens of the main temple stop preparing bhog or mahaprasad (food offered to the deity and it is given to a devotee as the deity’s blessing). The Mahaprasad consists of rice, lentils, vegetables, etc. The kitchens of the Gundicha temple are repaired and food is cooked there to offer to Jagannath. The day of Sandhya Darshan, (evening prayers) the second last day of the festival is considered the most important day to have darshan of Jagannath. On this day, as thousands of devotees throng the temple to have darshan of Jagannath and partake of Mahaprasad.

5. Bahuda Yatra
The return journey of Jagannath, Balabhadra, and Subhadra to the main temple, after spending seven days in the Gundicha temple, is known as the Bahuda Yatra. The deities are taken in the same chariots in which they arrive, pulled by devotees back to the main temple. It is considered auspicious to get a glimpse of the deities on their chariots.