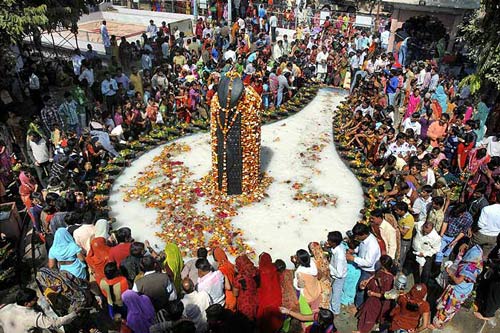 Shravan Month is considered very auspicious among Hindus all over the world. Devotees keep fast on Mondays for Mahadev or Lord Shiva. Shrawan Month will begin from 6th July of the year 2020 and will end on the 19th of August 2020.

Shravan is considered as one of the holiest auspicious months in the Hindu religion. The Shravan Maas is auspicious for worshipping Lord Shiva, who is also known as ‘Shambhu’, and his wife Goddess Parvati. It is believed that worshipping Lord Shiva on this day will help people get salvation and therefore special prayers are organized in temples to please him. In the month of Shravan, various other festivals like Naga Panchami, Shravani Purnima, Vara Lakshmi Vrata, Govatsa, Raksha Bandhan, Kalkyavatara, Putradaikadashi and Rishi Panchami are celebrated.

What is the importance of worshipping Lord Shiva in this month?

According to legends, Samudra Manthan – churning of the ocean by the devatas (Gods) and asura (Demons) – to get Amrit was started in this month.  the holy Shravan Month was the one during which the Gods and Demons decided to churn the ocean to decide who among them was the strongest. This Samudra Manthan has a beautiful divine story with the marriage of Lord Vishnu and Goddess Lakshmi. Samudra Manthan was initiated by Lord Vishnu as a conspiracy. As a result Samudra Dev (Father of Goddess Lakshmi), will have to accept the marriage proposal of his daughter Goddess Lakshmi with Lord Vishnu. And on Samudra Dev’s denial, Samudra dev will have to release his precious treasures and resources present in Samudra. However, this Churning activity released both poison and Nectar. The Gods and demons had agreed to share the nectar equally among themselves but ‘Halahal’ or poison was also churned out which started destroying all kinds of life forms on earth. Snake Vasuki, who is depicted on Lord Shiva’s neck and Sumeru Parvat was used for the Manthan. To stop this, the Gods and the demons prayed to Lord Shiva who then drank that poison and saved the world. Therefore, Lord Shiva is worshipped in the month of Shravan as a gesture of gratitude.

In this Shravan month, each Somvar or Monday is called Shravan Somwaar and is considered highly auspicious. All Mondays in Shravan month are celebrated in Lord Shiva temples.

A Dharanatra is hung over the Shiva Lingam filled with Holy water and milk, to continuously bathe the lingam, throughout the day and night. Shiva devotees then offer Bilva leaves, holy water and milk and flowers, also known as Falam toyam and Pushpam patram to the Shiva Lingam during Sawan Month every Monday. Devotees fast until sunset and the Akhand Diya burns throughout this time of Shravan Month.This period is considered very auspicious to the devotees of Lord Shiva and almost every one of them will be fasting either for the whole Sawan Month or at least every Monday of the Shravan Maas.

Monday: is the day to worship Lord Shiva.
Tuesday: women worship Gauri for the better health of their family.
Wednesday: is dedicated to Lord Vithal, an incarnation of Lord Vishnu
Thursday: is the day to worship Buddha and Guru
Friday: For worshipping Goddess Laksmi and Goddess Tulsi
Saturday: are for Saturn (Shani Dev). These days are also known as Shravan Saturdays or Sampat Sanivara (wealth Saturdays) as one can pray for obtaining wealth.
Sunday: are for the Sun god. Sun worship was common practice in the Vedic period and it is followed even now. Especially in Shravan, every Sunday the Sun is worshipped.